It’s time to resurrect the satirical style of John Heartfield, who successfully lampooned Hitler and Nazism. 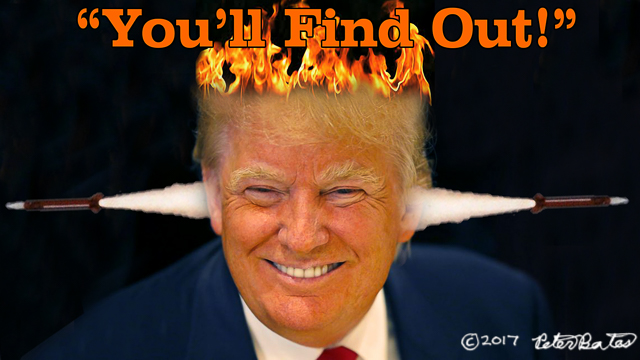 Whenever I encounter one of John Heartfield’s works, I say to myself, “We do need a few like him these days. So where are they?”

Who was he? Artist John Heartfield (born Helmut Herzfeld; 19 June 1891 – 26 April 1968) has been an inspiration ever since I discovered his work 40 years ago.  He started out as a German landscape painter, who was introduced to the Dada movement by fellow artist George Grosz in 1916. (Heartfield quickly burned all his conservative oil paintings except one.) He threw his lot in whole heartedly with the Dadaists toward the end of World War I and then helped organize the Erste Internationale Dada-Messe (First International Dada Fair) in Berlin in 1920. Soon afterward he became skilled in the art of photomontage, while at the same time adopting a progressive political outlook. When Hitler and his Nazi machine took over, he aimed his art straight at them and fired off work that nailed the regime so thoroughly that he had to flee to Czechoslovakia. Once there he rose to number five on the Gestapo’s most wanted list.

His art is both hard-hitting and damned clever. You can see why the Nazis wanted him dead. In other pictures, he exposed the relationship between the Nazis and big business and how propaganda works its wonders on an unsuspecting population.

Like America’s contemporary, Father Coughlin, Hitler spewed his ideas on an early version of the right-wing talk show: the radio. Both appealed strongly to uneducated and culturally illiterate audiences. But Hitler incited them so well, he sparked a rebellion against the democratic Weimar Republic’s government, which allowed him to institute fascism (a.k.a.the Third Reich). The German upper classes were finally off the hook. They no longer felt they had to enact even miniscule reforms for the lower classes. As has been proven in recent studies, Hitler served the top employers of German industrial and financial corporations like Krupp, Bayer, and IG Farben. In the picture above, Heartfield subjects Hitler to an x-ray that reveals that he’s filled with coins. The “spouting junk” is the virulent speeches that scapegoated dispossessed populations like the Jews. The picture is eerily appropriate today, when right-wing American politicians get goodies from plutocrats like the Koch brothers for supporting corporate interests and opposing humanitarian reforms, and creating scapegoats out of ethnic groups like Muslims.

Here’s another Heartfield photomontage from 1935 that reveals the absurdity of right wing propaganda.

John Heartfield depicts a bourgeois German family eating a nice meal of… machinery and scrap metal! I particularly like the baby gnawing on a metal axe. It’s a shocking image, but Heartfield doesn’t stop there. Check out Hitler’s prominently placed image and the swastika wallpaper. There’s no doubt what this image is about. “Hurrah, Die Butter Ist Alle!” (Hurrah, the Butter is All Gone!) satirizes German support for the Nazi party, which by 1935 strained the bounds of reason in many people’s minds.

Heartfield was inspired by Herman Goering’s speech that he gave in Hamburg in 1935. Since then it’s been labeled the notorious “guns or butter” speech. Here’s an excerpt:

So Heartfield masterfully exposed how ridiculous this statement was. The people participating in this bizarre feast are the ones who can’t see through Hitler. They are truly unthinking robots and need to be shaken until they turn on to the truth.

How did he create these pictures  way back then? Few books about Heartfield document his working process. From what I can gather from  snippets on the internet, he constructed his first photomontages by collecting newspapers and magazines, then cut out images he needed (or thought he might need. I imagine shoeboxes filled with images, categorized by type.) When an idea occurred, he would glue the pieces onto cardboard to create a theme or even a little story. Soon his work got more complex. For pieces like “Hurrah! Die Butter Ist Alle!,” he probably staged it first with actors and added the iron hardware later. In some of his pictures, you can see evidence of airbrushing and re-photography via a large format process camera.

But my purpose here is not to explain how photomontage was done in 1936 (and resurrected during the sixties to sell U.S. record albums). I just think the art form should be resurrected. Our troubled times clearly call out for it.
Is it hard to do? Not really, if you have basic Photoshop skills. I did a few recently.

While conducting his propaganda, U.S. President Donald Trump lied repeatedly about the size of his base. In June of 2017, he claimed he had 100 million social media followers. But a recent CNN article pointed out in a recent analysis that the figure was closer to 60 million. They added that “many of those followers are the same people using different accounts.” CNN then used another analytics tool, Twitter Audit, to estimate that “11.6 million of Trump’s 32 million Twitter followers are either dormant or accounts run by bots.”

I had to parody this travesty of exaggerated supporters, so I turned to Heartfield for inspiration.

In 1932, before Hitler took power, he executed one of his most memorable photomontages. Translated, it means “The Meaning of the Hitler Salute: Little Man Asks for Big Gifts. Motto: Millions Stand Behind Me!”

More than eighty years after Heartfield, on 10/6/2017, Trump made two puzzling statements during a White House speech about nuclear tensions with North Korea. In one, he warned of a “calm before the storm.”

When asked by reporters what he meant by his comment, he replied, “You’ll find out.” This statement, while not as patently ridiculous as Goering’s, is pretty frightening. So I put together the following photomontage to explain what he might have been talking about. When shown publicly, some people gasped, others chortled. Perhaps it fit writer Bertolt Brecht’s dictum about putting topical material in a play. “It’s no good unless half the audience leaves the theater outraged.” (In my case, a couple of people did leave the room.)

The time is ripe for photo-enthusiasts of the world to unite and expose their authoritarian regimes through wit, humor, and perseverance.  If you want to know the technical details of how I did it, please comment below. If enough respond, I’ll do it.