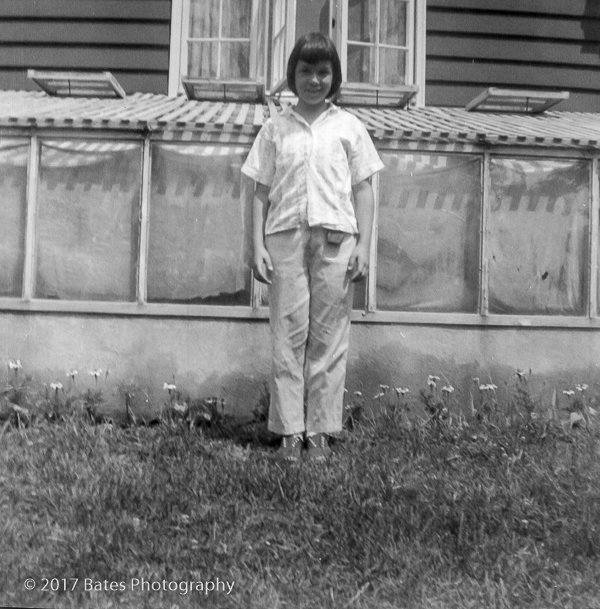 I was in the fourth grade. For months before my July birthday I’d been haranguing my father to get me a camera. I specifically put in an order for one like he had. I believe it was similar to this Nikon. I particularly liked the way you could “hold it up to your face.”

What I got was this:

The Brownie Hawkeye. Complete with flash and twelve flashbulbs, the camera was perfect for a nine-year old kid. It took 12 pictures and it would only take a week for them to get developed by Liggett’s Rexall Drugs in downtown Danvers, MA. You could even drop it on the ground (but watch that pavement) and it would still work. I know that part’s true because I still have it on my shelf. And it still works. Plus it doesn’t need batteries.

Back then I hated it.

You had to hold it at waist level and frame your picture by looking down at a wonky glass viewfinder that showed everything in reverse. It was very disorienting. So I acted like a brat and refused to use it. For a month it stood in the floor of my closet in the box that it came in. The same box it’s still in.

Until August 15. Pammy came over to my house and I realized with child horror it was her birthday. I hadn’t gotten her anything! But I believe she said something like, “That’s okay. Just take my picture and give me one.”

I protested that I didn’t know how to use the camera and it was hard to aim and it was for dummies and besides it didn’t take good pictures anyway. Mostly because you couldn’t hold it up to your face.

She insisted. So my father loaded the camera and I took it outside made her stand in front of the greenhouse where he raised orchids. Then I took the picture. The next week I brought the camera with me to a picnic and went crazy and shot two rolls of film. I still have those pictures too. And I never stopped.

What I don’t remember is giving her a copy. So Pam, here is your picture. First one I ever took. Only a few decades late.

3 thoughts on “First Picture I Ever Took”